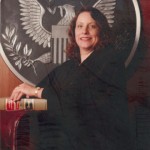 On April 14, 2014, Judith C. McCarthy was sworn in as the newest Magistrate Judge for the Southern District of New York by Chief Judge Loretta A. Preska.  Judge McCarthy commenced her service on April 28, 2014, filling the seat in the White Plains courthouse vacated when Magistrate Judge George A. Yanthis retired in October 2013.  A public induction ceremony in honor of Judge McCarthy’s appointment was held in the ceremonial courtroom of the Daniel Patrick Moynihan U.S. Courthouse in Manhattan on October 28, 2014.  Judge McCarthy has been warmly welcomed to the Charles L. Brieant, Jr. Courthouse in White Plains by her new colleagues and by the court staff.  She also enjoys the camaraderie and support from the bench, from the Southern District of New York and across the country.

Before ascending to the bench in 2014, Judge McCarthy thought that a judgeship might be isolating, but she has been pleasantly surprised by the camaraderie and support she feels in her new position.  Judge McCarthy feels comfortable in the collegial atmosphere of the White Plains courthouse, able to ask any questions and seek any guidance, whether from fellow judges, attorneys, or courthouse employees.  She noted that in the context of criminal cases, with which she had little prior experience, both prosecutors and defense counsel have provided guidance to help her to avoid making mistakes.  Judge McCarthy recognizes the particular importance of being quite deliberate when setting bail in criminal cases, as this decision may have an impact on the entire posture of a defendant’s case, and so she takes great care in considering her options in that regard.

Judge McCarthy’s extensive litigation experience has well-prepared her for the wide variety of civil cases assigned to her docket, and she is especially pleased to see many types of cases with which she has had prior experience, including particularly employment related cases, Section 1983 litigation, and personal injury claims of all sorts.  Her own experience with similar cases has helped Judge McCarthy supervise the discovery process efficiently, and determine whether the requests made by counsel are reasonable in the context of those cases.  Judge McCarthy observes that the magistrate judges in the Brieant Courthouse in White Plains have a hands-on approach to supervision of the cases assigned for General Pretrial Supervision, and this permits her to develop a thorough knowledge of the cases, smoothing the process of discovery as well as settlement.  Her experience also has guided her handling of criminal matters – approaching each case deliberately and with an open mind.  Judge McCarthy has a significant load of cases where the parties have consented to have her responsible for the entirety of the case. Her first trial of one of these cases is scheduled for early December.  It is fair to say that she has hit the ground running.

Elizabeth A. Wolford in the Western District of New York