As we bid farewell to Jeanette Redmond, the executive director of the Federal Bar Council since 2002, we sat down with Jeanette to reflect on her tenure, learn about the path that brought her to the Council, and talk about the road forward.

Jeanette’s route to the Council was anything but usual. She grew up in Spanish Harlem in a three-bedroom apartment where she lived with eight relatives. She lived with her mother, aunt, and six other children, including her siblings and cousins. Her mother, whom Jeanette says was incred­ibly hardworking and frugal, did not work outside the home and Jeanette’s prime “professional” role model was her aunt who did clerical work. It was not glamor­ous by any means, but in the eyes of a child it was wonderful and securing a similar job became Jeanette’s goal.

When Jeanette graduated from high school, she never had a thought of attending college. In Jeanette’s words “it was not a concept in my universe.” She im­mediately achieved her goal of securing a clerical position and, after holding a few different entry-level jobs, she answered an ad for a temporary position at the Met­ropolitan Transportation Author­ity, which remarkably turned into a 12-year career at the Authority. It was also the place where Jea­nette’s life took a decided turn to­ward higher education.

At the MTA, Jeanette ulti­mately was assigned to adminis­trative support work in the gen­eral counsel’s office. Based on the work she was doing there, including taking minutes for the very public MTA board meetings, proofreading legal briefs and serving as the FOIL officer, and with the great encouragement of the attorneys, Jeanette enrolled in a nine-month paralegal course at Adelphi University. Soon enough, however, Jeanette real­ized she wanted greater challeng­es and responsibilities. With the support of the MTA’s generous tuition reimbursement plan, Jea­nette enrolled in evening classes at N.Y.U. to earn her college degree (summa cum laude) and then continued her education by attending Fordham Law School’s evening division. After nearly a decade of working full time and attending school at night, Jea­nette graduated from Fordham Law School in 1997.

During law school and while on leaves of absence from the MTA, Jeanette was a summer associate at O’Melveny & My­ers and Proskauer. Upon gradu­ation, she accepted a one-year clerkship with Eastern District of New York Judge Thomas C. Platt, and thereafter she joined Davis Polk & Wardwell. Davis Polk assigned her to its Hong Kong office, where she found her legal niche in business and secu­rities transactions, mergers, and joint ventures. Jeanette enjoyed the diverse practice and working in Asia despite the frenetic pace and seemingly endless hours due to the time difference with the States. While working in Hong Kong, she was temporarily as­signed to the Tokyo office for a few months. She was in process of exploring a permanent reloca­tion to Tokyo when everything abruptly changed once again. This time it was 9/11 – an event that changed the lives of too many.

Jeanette was deeply affected by 9/11. She had worked on the 97th floor of the World Trade Center and felt that she needed to be on American soil and in New York City to process the events with family and friends who understood the dimension of the disaster because they, too, were part of it. She returned immedi­ately to New York.

Once back in New York City, Jeanette returned to the practice of law but found that she was growing tired of the frenetic life of a law firm. She saw an ad in The New York Times for a job as executive director of the Federal Bar Council and decided to fol­low up 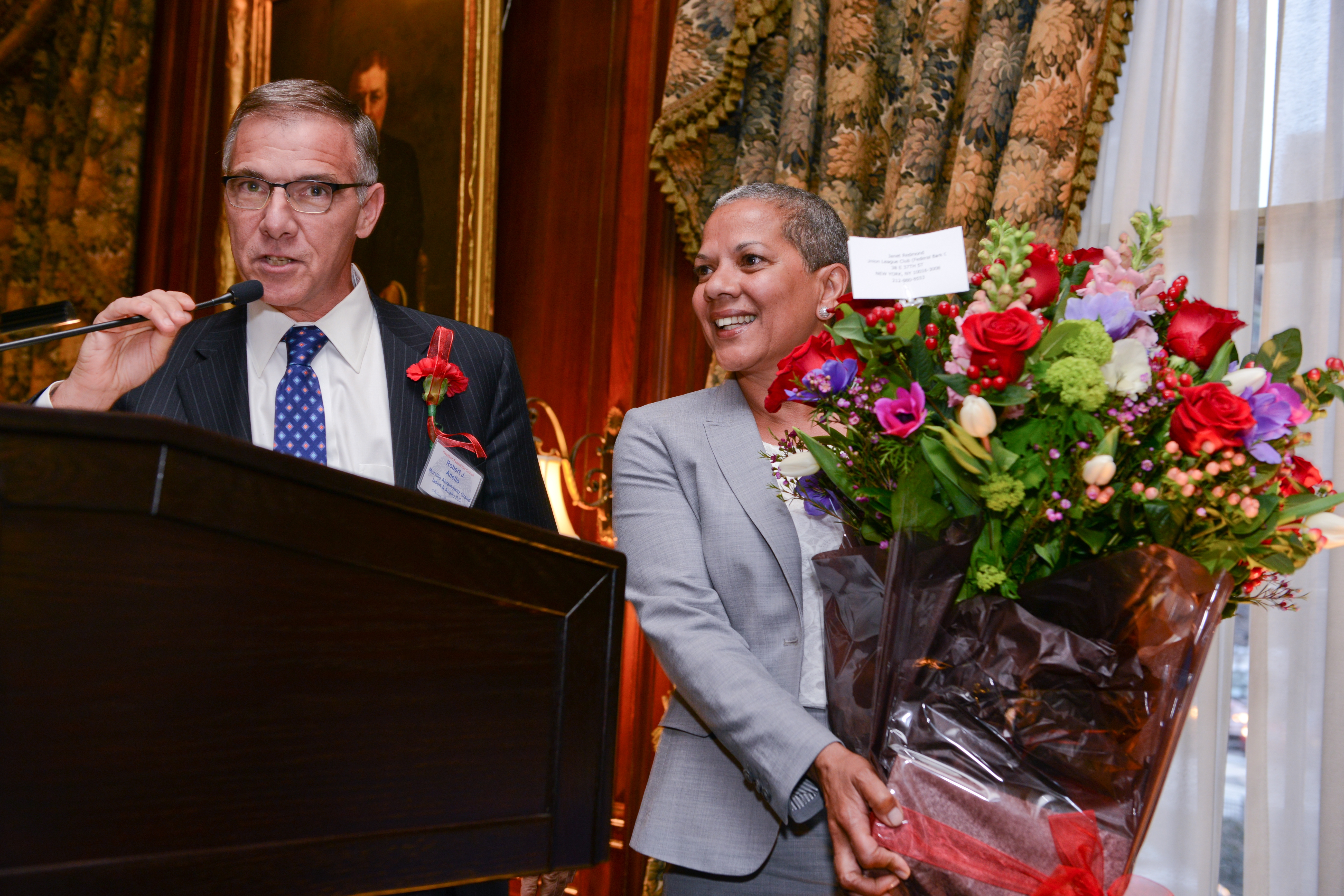 . After interviewing with Kevin Castel, then president of the Federal Bar Council, and Jer­ry Walpin, then president-elect, as well as several board mem­bers, Jeanette was offered the job. Excited by the prospects of pouring her energy into this orga­nization, which she saw for all its potential, she began her tenure on April 15, 2002.

In the Council’s tiny office on 43rd Street and Lexington Av­enue, Jeanette began an intense process of learning about the organization. She had a month overlap with the outgoing execu­tive director, Peggy Brown, to begin that process, and then she was on her own. At that time, the staff consisted of only one full-time employee in addition to the executive director, a part-time clerical assistant and bookkeeper who worked one evening a week. The organization had only three stand-alone computers and no network. Today, there are nine full-time staff members, and the Council has embraced the digital age – although in Jeanette’s view it still has a long way to go.

Prior to Jeanette’s arrival, many Council activities were managed by the lawyers them­selves, with little or no help from the executive director. Under Jeanette’s direction, the staff be­came involved in all aspects of the Council, and today there are no activities that do not involve the staff. That has enabled the lawyer-volunteers who are active with the Council to do what they do best – practice law – and it has contributed to the organization’s growth from about 1,600 mem­bers in 2002 to 3,700 members today.

Jeanette also has overseen the challenge of navigating the Council into the Internet world. A major change in the organiza­tion has been transforming the website from a static information site to an interactive site where payments, registration for events, and CLE programs and member updates can occur in real time online. That change has led to a huge increase in membership participation in events and CLE programs.

Looking back, Jeanette’s fondest memories are those on the personal level. During the last 12 years, she has watched young associates become part­ners and partners become fed­eral judges. She has observed the growth and success of the Inn of Court and the Fall Bench & Bar Retreat. She has enjoyed the experience of working with seven presidents: Kevin Castel, Jerry Walpin, Joan Wexler, Mark Zauderer, Bob Guiffra, Frank Wohl, and Bob Anello, each of whom has brought his or her own style and focus to the job. Work­ing with them, she feels she has learned how very successful peo­ple can achieve their goals in dif­ferent ways.

There are a hundred anec­dotes about the innumerable cri­ses that needed to be solved along the way – including one particu­larly poignant scene at a Winter Bench & Bar Conference where a member arrived at the event with­out any of his medication. She recalls the attendees scrambling to find others with the same med­ication who were able to pitch in until supplies could be found. She has enjoyed the “warm and fuzzy” feeling that characterizes so many Council events.

When asked about the aspects of her job that she found most challenging, Jeanette responded without reservation that it is keep­ing member volunteers motivated and involved given their incred­ibly busy lives and the extensive commitments they have in addi­tion to the Council – volunteers, she joked, “who promised some­thing to the Council in a moment of weakness.” Jeanette marvels at the commitment of the mem­bership and the endless hours spent by many lawyers who have made the Council a premier orga­nization.

The biggest challenge facing the Council now, in Jeanette’s view, is how to make the most use of technology to address mem­bers’ needs and to be responsive to increased competition for our members’ time and money. She recognizes the strong need to continue to engage the younger members of the Council and to use social media in that process. Figuring out how to do that and what will work will take time, energy, creativity, and a healthy dose of experimentation. In that process, she hopes that the Fed­eral Bar Council will remain committed to the personal, social human interactions that always have characterized its events. In Jeanette’s words, “Technology can increase participation from afar, but the value of staying close should not be lost.”

As Jeanette prepares for the future, her path is taking another exciting turn. After her last day on April 30, 2014, Jeanette and her husband of 23 years took a cruise in the Caribbean, and she and her husband will move on to a new adventure in Hono­lulu, Hawaii. Honolulu offers some of the attraction of a new culture that she recalls fondly from her days in Asia, while also providing the comfort and familiarity of the States. Hav­ing spent a good deal of time in Hawaii as part of her work with the Council, she grew to love it and is looking forward to mak­ing a life there. She does not yet know what work she will do, but has confidence that she will find work there as meaningful and as important as the work she has done for the Council.

As to her successor, Jeanette believes that a new executive di­rector, with a fresh outlook and new ideas, will be very positive for the organization. She has no doubt that her “amazing” staff, who are “full of energy” and “passionate about the quality of their work,” will create a smooth transition into the future.