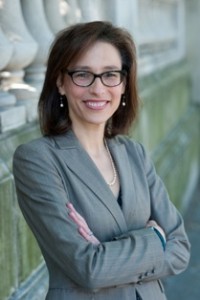 The Federal Bar Council Inn of Court, under the leadership of Sheila Boston, enjoyed another successful year of insightful, thoughtful, and creative programming. At the end-of-year dinner on June 16, 2015, Judge Roslyn Mauskoff was installed as president for 2015-2016 and Peggy Kuo was announced as president-elect.

The evening concluded with the annual musical production by the Inn of Court Players. This year’s show, entitled Southern District Story, was a takeoff on West Side Story, featuring the amusing feud between two gangs — the Feds (prosecutors) and the Sharks (defense lawyers).  When the prosecution (Steve Edwards, Jane Goldberg, and Larry Krantz) indicted a fisherman (Sheila Boston) under Sarbanes-Oxley for throwing fish overboard (a la Yates v. U.S., 135 S. Ct. 1074 (2015)), her defense team (Margie Berman, Lia Brooks, Jason Canales, and Karla Sanchez) geared up for a win in this very public trial.  Tensions in the courtroom of Judge Phyllis (Phyllis Maglieri) were high from the start.  But when prosecutor Tony (Andrew Mancilla) and defense attorney Maria (Sammi Malek), met in court, their passionate entanglement led to trouble and raised the temperature of the impending trial (and each other).  As each side looked forward to their win at trial (and the public attention) they sang (to the tune of “Tonight”):

This trial, This trial.
Won’t be just any trial.
This trial will make my name, my career

This trial. This trial.
I’ll show the world my style.
What I do, what I am,
Have no fear

With this, I’ll make my name forever
Become a true rainmaker
It’s what I’ve practiced for

But more than me
PROSECUTORS: I know she’ll be convicted
DEFENSE LAWYERS: She’ll go free

My cross, will skewer like an arrow
My closing just like Darrow
Will leave them all in awe….
And here we are
And one will be a loser, one a star
This trial

We do not want to give it all away in case you are able to see the show in revivals.  Rest assured, in the end, as in all corny musicals, justice prevailed and love carried the day.